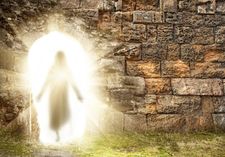 Christ is risen - He is risen indeed! Some of us on the team who have been around for many years remember when Easter was not much of a celebration in the Turkish church. Christmas at least was a concept they knew from movies and it fit in well with New Year, a holiday they already had. But Easter has been slow to 'catch on.' The message of the resurrection, of course, has been treasured as much by Turkish believers as any believer anywhere.  But Easter as a 'holiday'? Not so much.

The Turkish church has grown in depth, leadership and numbers and so this has been changing. It might have been the year when Turkey's biggest holiday - Kurban Bayramı, the 'Sacrifice Holiday' - coincided with Easter. Kurban Bayramı celebrates God's provision of a sacrifice so that Abraham was not required to sacrifice his own son. Amazing, isn't it? This is a redemptive analogy in Islam that we believe is key - and so we in TACO have a theatrical production about it.

But I digress. I was talking about Easter. The year that Kurban Bayramı and Easter were over the same days was the first time, I think, that I saw a difference the celebration of Easter. Celebrating the sacrifice, the Risen Lamb, brought their theological knowledge together with the emotions surrounding a tradition and deeply embedded holiday.  It's no wonder the early church, rather than inventing new holidays, infused new meaning in the holidays that already existed.

And so tomorrow we celebrate the resurrection of the Lamb - where God has not asked of us the sacrifice of our firstborn, He has sacrificed His own firstborn for us. And that firstborn is the overcomer, setting us free from sin and death.  Happy Easter - it is happy indeed.