Allergic to the Gospel

A friend of mine who has been at the task of sharing the Gospel with people in Turkey for many more years than I, once made the remark that most people here are allergic to the Gospel. It was an interesting comment, and if it is actually true, one that impacts anyone trying to spread the message of Jesus here. 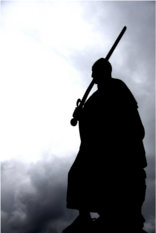 As we look back, it’s not hard to find a dark history of bad blood between European Christian political powers and the Ottoman Islamic powers. Of course, it goes both ways – and people in formerly Ottoman-ruled countries often don’t remember those periods as fondly as the people in Turkey do. However, every nation (including my own) tends to write its most of its own history from a “we were the good guys” point of view, so it’s hardly surprising that people growing up in here think like this. Despite the great and genuine hospitality of locals here towards foreigners, viewing all foreigners (especially folks calling themselves Christians) with varying degrees of mistrust based on what they learnt about our forebears in school is pretty ingrained. It must also be said that that same mistrust of Muslims can be found in most “Christian” countries too...

But it’s not just politics and history – based on the same repeated misinformation about the Christian faith I hear time and again from people I share the gospel with, locals in Turkey have a pretty distorted view of the Christian faith itself. You really would have to be a nutter to believe in the form of Christianity I hear from many of the people I meet! Some of the school textbooks are flat out wrong and the rest comes from hand-me-down hearsay and rumours from trusted family members and friends. I have no experience of more formal religious education in this country so can’t comment about that.

And let’s not forget that with less than .01% people in the country claiming to be a Christian (including the minority Orthodox churches), hardly anyone in this country has first-hand, personal experience of an actual living Christian to form their own conclusions about the faith.

As an aside, a local pastor here who comes from a Muslim background told me once that Christians in his town have a reputation of being honest and hard-working – largely due to the legacy of the (now almost totally vanished) Armenian population from generations past. So that’s something to be thankful for at least.

However I think you understand the general picture. When you combine a lack of personal contact with centuries of violence and a theology that is absurd at best and idolatrous at worst (the greatest of all sins for a pious Muslim) it’s hardly surprising that folks here are not exactly flocking to our Jesus!

So there’s the challenge for us here in Taco: combat centuries of misinformation, miscommunication and mistrust... all in 3:05 (to sort-of-quote a line from Billy Joel’s song “The Entertainer”)

There's lots more that could be said about this of course. Feel free to add your own views in a comment below...